Why Static Site Generators aren't Good for My Blog

I would be speaking about my own experiences and you may have noticed my in the title, which is there to remind you about the subjective nature of this article. I don’t dare to speak about your blog or any other blog out there, but my own. I have no intention to convert you to my side, yet I would be very glad to see some of the like-minded people out there. I know they exist. My own research on the topic has unveiled, that although static site generators have this zealous following, there are sober voices in the crowd, appealing to common sense. This is exactly why Kevin Dangoor went “From Wordpress to Octopress and Back” or why Michael Rooney is “Migrating from Octopress to WordPress” — in the exact opposite direction from the majority of switchers. 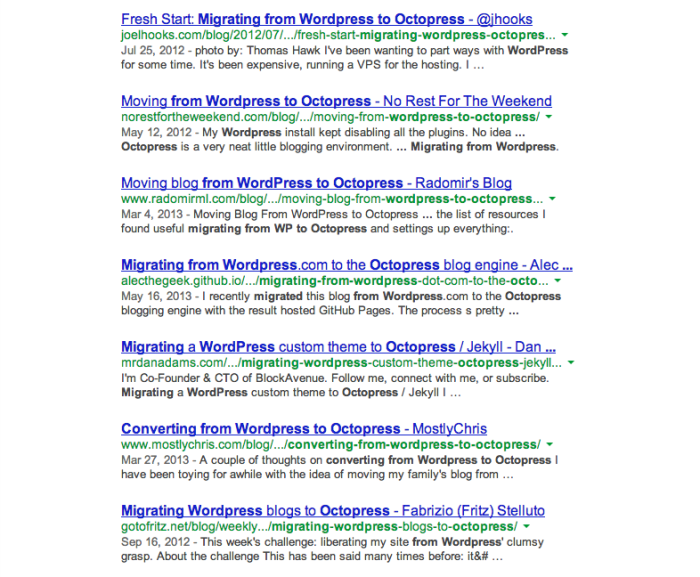 It doesn’t boil down solely to Wordpress vs Octopress debate, as the issue in hands is much broader and may be represented as dynamic site engines vs static site generators. If you’re not aware of the difference between the two, here are the basics: with dynamic site your content is generated dynamically by an application running on the server side, static sites, on contrary, are pre-generated or written outright in HTML. Basically, dynamic sites are a web-applications that could change their behaviour instantly, depending on input and other factors, while static sites: well, they’re just HTML files passively sitting there, waiting for you to open and read them. Sure, with introduction of jQuerry, Java Script and HTML 5 to the mix, the difference gets a little blurry, but let’s stop at this level.

So, static vs dynamic. It could be virtually anything: Tumblr vs Hyde, Blogger vs Pelican, Movable Type vs Jekyll, etc. Major differences between the two paradigms are more or less the same. It means that we should be really comparing the paradigms themselves, not their instances.

So, what are the lucrative advantages of the static generation model? What makes people switch so quickly and without looking back? I came up with 3 most important reasons:

All three are valid points and at some moment I went down the static path myself with all three in mind. First I went with Jekyll, then switched to Octopress. At some point I even tried to make Sphinx-generated site (sic!) work as a personal web-page, but lack of blog awareness and increasing complexity made me abandon this idea. When they say that running this kind of site is the easiest things to do, this is complete nonsense. In terms of comfortable workflow, I only can say a couple good things about pure Jekyll paired with GitHub Pages, but the result was so raw and required so much customization, that straightforward workflow was hardly an advantage. It is positioned as a toy for true geeks, tinkerers, but I don’t see how anyone could really benefit from this kind of tinkering (yeah, even geeks and tinkerers). I work in IT and we are here mainly to solve problems, not create tons of complimentary issues. Instead of reinventing the wheel, you could as well invest your time into something, that really needs to be done, perhaps — writing good stuff for your website.

I’m not the only one who noticed it, but for several months I’ve been experimenting with static generators, I’ve hardly written half a post. It was a common problem, as I googled it. People dug so deep into the endless customization and switching routine that eventually they’ve stopped writing. I may sound conservative to some, but I still think that blogging is mainly about writing. Sure, to some extent, this problem is applicable to dynamic platforms too (ping pong between Wordpress and Blogger, anyone?), but with static generators it grows to catastrophic proportions. They are the ultimate time drain for nerds and wannabes. Sure, if your time worth basically nothing and constant tweaking your blog is the best part about having it, be my guest. To me it looks pretty much like that little joke from Fry&Laurie:

Oh, yes, my boyfriend’s a real DIY enthusiast, DIY mad. He’s decorated the whole room and he’s put up all these bookshelves, and now he’s writing all these books to put on them.

Another seeming advantage of static site generators is their reliance on plain text, that could be utilized in distributed version control systems like Git. Most switchers assume, that they already use plain text and Git for code, why not use it for a blog? The problem is, that it also complicates things instead of easing them. Each generator has its own super-easy-workflow™ with different special folders, commands and scripts — quickly it becomes a mess. In this regard Git is basically one more noose on your neck. I’d focus on one especially nasty implementation of Git in such workflow — Octopress. You should fork the original Octopress repo, the _deploy folder will be used for deploy to the pages repository and sources should be committed to the special source branch. Now imagine what would happen if a somewhat major update gets pushed to the upstream of Octopress and your copy has been significantly modified over time. As someone has put it: “Octopress is great, until it breaks”. If you have some experience with Git and seen the Octopress workflow, you may imagine the hell it could possibly be. Actually, Octopress is itself a heavily modified version of Jenkins. No offence, but it all seems like Rupe Goldberg machine to me.

If you google it, you will find lots of people, performing full-featured benchmark tests of Wordpress vs Octopress with a complete disregard for the principal differences between the two. People start speaking of security and speed benefits of static sites, forgetting about all the advantages of dynamic sites, that come at the price of increased complexity and bloat (yes, I do think Wordpress is a tad bloated). Imagine the situation: you need to jot down a post draft on a public or someone else’s PC? Will you be cloning the repo, installing ruby, Octopress — setting up all the environment to write a short post? What about mobile support? Should you attempt to pull Octopress to your mobile phone? What about preserving drafts in the cloud without publishing them, but having access to them virtually from anywhere and anytime? Can you really put a price on that? People start using Evernote or similar service for drafts, but does it really worth introducing another tool to your workflow? Does mobility and availability worth another couple seconds of load time? My own choice is comfort and efficiency. I want my blog to be complimentary to my technical endeavors, not the other way around.

I’ve started thinking that less is actually more a long time ago and it may apply to blogging as to almost any other area of our life. You may notice, that I don’t even use the standalone Wordpress install, but the pretty limited hosted Wordpress site. I prefer to pay engineers at Wordpress $13 for domain mapping and settle for less choice in themes, plugins and other options to focus on writing. We’re all too lost in the world of different platform and workflow options these days. Google it and you will see hundreds of rants about why platform A is deliberately better, than platform B, why static sites are better, than dynamic. You almost never hear that they help you in writing, no. It’s all about SEO, storage space, customization, load speed and other insignificant stuff, not directly related to blogging. We’re too obsessed with form and seem to forget about goddamn content. But, as I said before, it is all entirely subjective. You may still go down the static route, customize the ass out of your blog. You may even spend several years on writing your own static or dynamic blog engine from scratch, that will sure be absolutely unique and different from anything ever done before. Yet, I’m writing this post in a beautiful distraction-free WYSIWYG editor and my draft will be preserved online, when I press the Save button and no rake deploy is needed ever again.