Short History of my Relationship with Lenovo ThinkPad 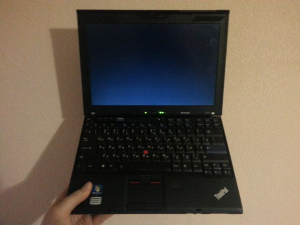 For those, who have limited time, this post comes down to the following statement: Lenovo Thinkpad X201 is the best X-series Thinkpad created yet. What follows is my attempt at proving this point with my merely anecdotal evidence. I’m funny like that. Here comes a short story of my relationship with Lenovo Thinkpad X series.

In 2013 I’ve been working as a technical writer (more technical than a writer actually) in a medium-sized web-slash-mobile startup and the Macbook, they’d given me, failed and I decided to try something new. At that time I got increasingly interested in Lenovo Thinkpad (yeah, it hadn’t been IBM for quite a long time already). A couple of my colleagues had these X220 machines and they seemed pretty solid and professional, especially with all kinds of Linux installed on them (I worked with a bunch of Python devs and everybody used their favorite flavor of Linux). My transition from Macbook to Thinkpad was also dictated by how Macbook wouldn’t let me use i3 WM (which I was completely sold on at the time) as the main WM. So I went to my manager an he approved my order. The problem was I wasn’t really familiar with modern ThinkPads then and ordered 14” model (thought I could use all the extra screen space). I figured any Thinkpad will do, but it was a mistake.

I got T431S which was admittedly quite expensive at the time, but didn’t look like Thinkpad at all. If anything it resembled plastic version of Macbook. It had a rather disguising chiclet (island-type) keyboard, no LED indicators, thinner body and as a result much less ports (although for the record I do understand S stands for slim). The only thing it had in common with the previous generations of Thinkpads was the clit, which was kinda useless without the additional row of buttons, the device actually had no touchpad buttons at all as it mimicked the Macbook-style platform touchpad (awful, awful trend, actually). The hardware was of questionable quality and it gave me lots of headache on Linux ( especially WiFi) despite the ThinkPads traditionally being considered one of the best laptops, when it comes to compatibility with Linux. I worked on this machine until the company went under, and got used to it somehow, but it never lived up to the image of Thinkpad I had in my head.

Even after that I didn’t give up on the Thinkpad series completely, though it clearly went downhill with every subsequent model. My wife got herself X230 at work and as I got to play with the device a bit, I had an impression that this is not as bad as 431S, so as the line moved forward I decided to go in the opposite direction. At that time I started working in a medium enterprise infosec company and they had Thinkpads all over the place, and most of these were the Thinkpads as I expected them to be from the day one. These were X201 models. They aren’t as outdated as the earlier ones but they have all the right features. Here is a short comparison between some of the latest X series models:

* - to be fair Thinkpad X250 actually went back to having hardware buttons, so X240 is not the whole new tendency, but rather disappointing stumble.

The only problem with X201 model for me is that it’s not available for sale officially anymore (at least where I live), I even tried to buy out my office X201, when leaving the company but they wouldn’t let me. So I found a place that sold used ThinkPads for a reasonable price and bought one from there. This machine is pure magic, and it doesn’t matter that it’s a bit outdated. It has i3 CPU (which is still fair these days), up to 8GB RAM (which is usually enough), extended 6 cell battery makes up for its age (easily gives me 5 or 4 hours of relaxed coding) and overall design hints at the times when the word Thinkpad meant something more than “an ugly plastic Macbook knockoff”. Without much exaggeration I can say, that in 12.5” X line of ThinkPads (at least to me) the X201 model seems greatly superior to anything made before (due to being relatively modern) or after. It’s still relevant today and has the potential of being developer’s muse (fetishist talking) and workhorse.

An update is due: although I still think X201 is one of the best ThinkPad X-series machines, after a heated Reddit discussion X220 seems to be an even better model with all the advantages of X201 (except the amount of LEDs 😏), plus newer hardware and better screen. You probably should consider that machine if you are shopping for classic ThinkPads.